OCTOPODA vessels from ECA Group are designed for launching and recovering unmanned systems for mine clearance. 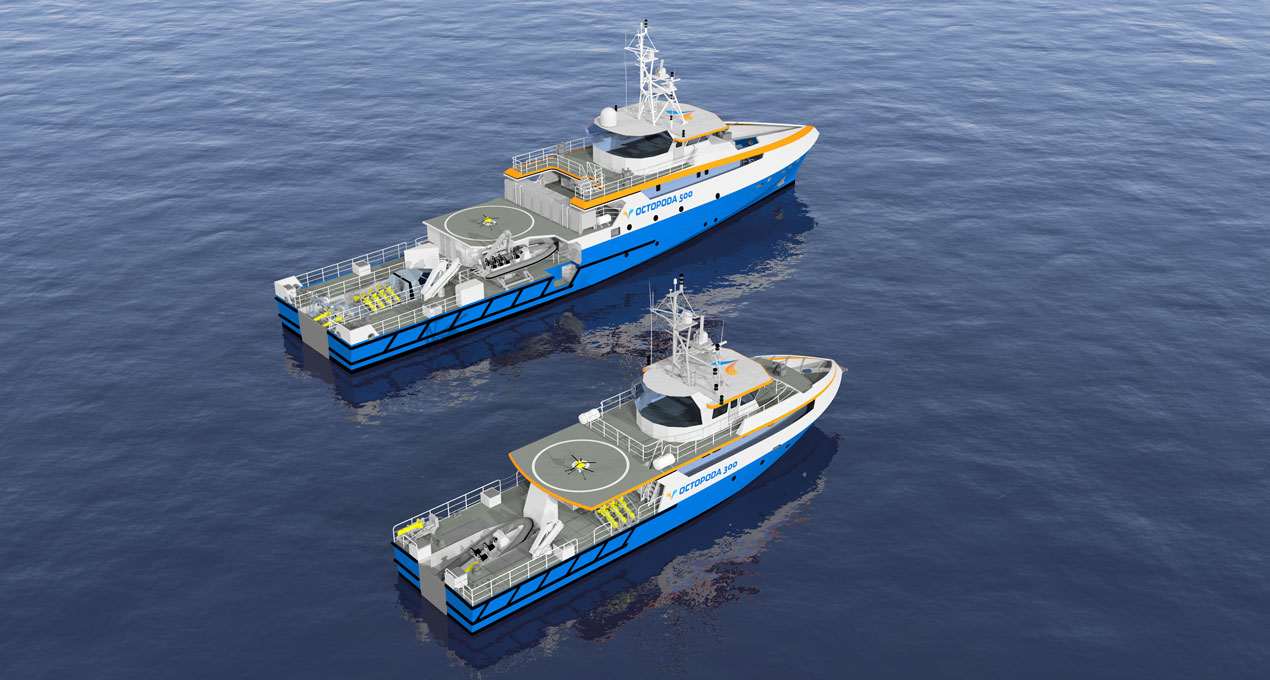 A graphical representation of the OCTOPODA vessels for unmanned mine warfare

France's ECA Group is better known for the unmanned robots it designs and manufactures that assist with the detection and disposal of sea mines. “The vocation of ECA Group is not to build ships.," stated ECA Group's CEO Guénaël Guillerme . "We are not a shipyard."

But a partnership with naval architects MAURIC has seen the French robotics manufacturer develop a range of ships with specifications similar to those of patrol boats or OPVs, but specifically adapted for mine clearance missions at sea using drones and robotic systems. The idea is to provide a fully integrated package for mine warfare comprising the mother ship and unmanned systems, which should make it easier for navies to exploit unmanned systems without worrying about integrating them with traditional minehunter vessels, which are costly to maintain.

The OCTOPODA vessels, which come in 30m and 50 m specifications,  were developed by ECA Group and MARUIC to remain at a safe distance from the minefield. They can be used as a  'mother ship' for deploying and controlling ECA Group’s UMIS system, which  is a system of different 'drones 'that can  carry out each step of a mine clearance mission: detection, identification and destruction.

As the OCTOPODA operates outside the minefield, ECA Group says it does not have to comply with demanding specifications relating to acoustic and electromagnetic signature, and shock resistance.

The launch and recovery of unmanned surface and underwater vessels from traditional minehunter vessels has proved challenging for most navies. But ECA says MAURIC’s naval architects focused specifically on two fundamental aspects concerning integration of naval drones: the integration of launch and recovery systems that are effective even in high sea states, and the ergonomics of the drone deployment zones on board the vessel.  The OCTOPODA vessels have been designed around these zones (aft deck, drone storage and maintenance hangar, drone system control centre).

Just 30 metres in length, the OCTOPODA 300 can deploy a naval drone system comprising two  A9-M  AUVs, identification robots and destruction MIDS (Mine Identification and Destruction System) consisting of 2  SEASCANs  and 6  K-STER Cs. These underwater robots can be deployed from the OCTOPODA 300 or a 7m RHIB nested in an aft ramp.

The OCTOPODA 300 also comprises a small landing platform for deploying an  ECA IT 180 UAV  lightweight drone. The design incorporates a specific hangar with direct access to the aft deck and a control centre with a bird’s eye view of the deployment zone, the objectives of which are to simplify handling of the robots and optimise operability of the entire UMIS  system.

For navies wishing to deploy a more sophisticated configuration of the UMIS  system, MAURIC has developed a 50 m vessel, the OCTOPODA 500, which can launch and recover a 12 metre  INSPECTOR 120  USV from an aft ramp. By adding the USV, ECA Group says it is possible to deploy AUVs (two A9-Ms, two SEASCANs and 10 K-STER Cs) in autonomous mode to penetrate further into the minefield. The UAV landing platform is larger and therefore makes it possible to land the IT 180 in more difficult sea states.

The OCTOPODA 300 and OCTOPODA 500 will be on show at the ECA Group stand at the EURONAVAL trade fair taking place in Paris Le Bourget from 23 to 26 October 2018.