As countries ramp up efforts to develop Directed Energy Weapons, a laser weapon system on board a US Navy ship successfully shoots down drone during at sea tests. 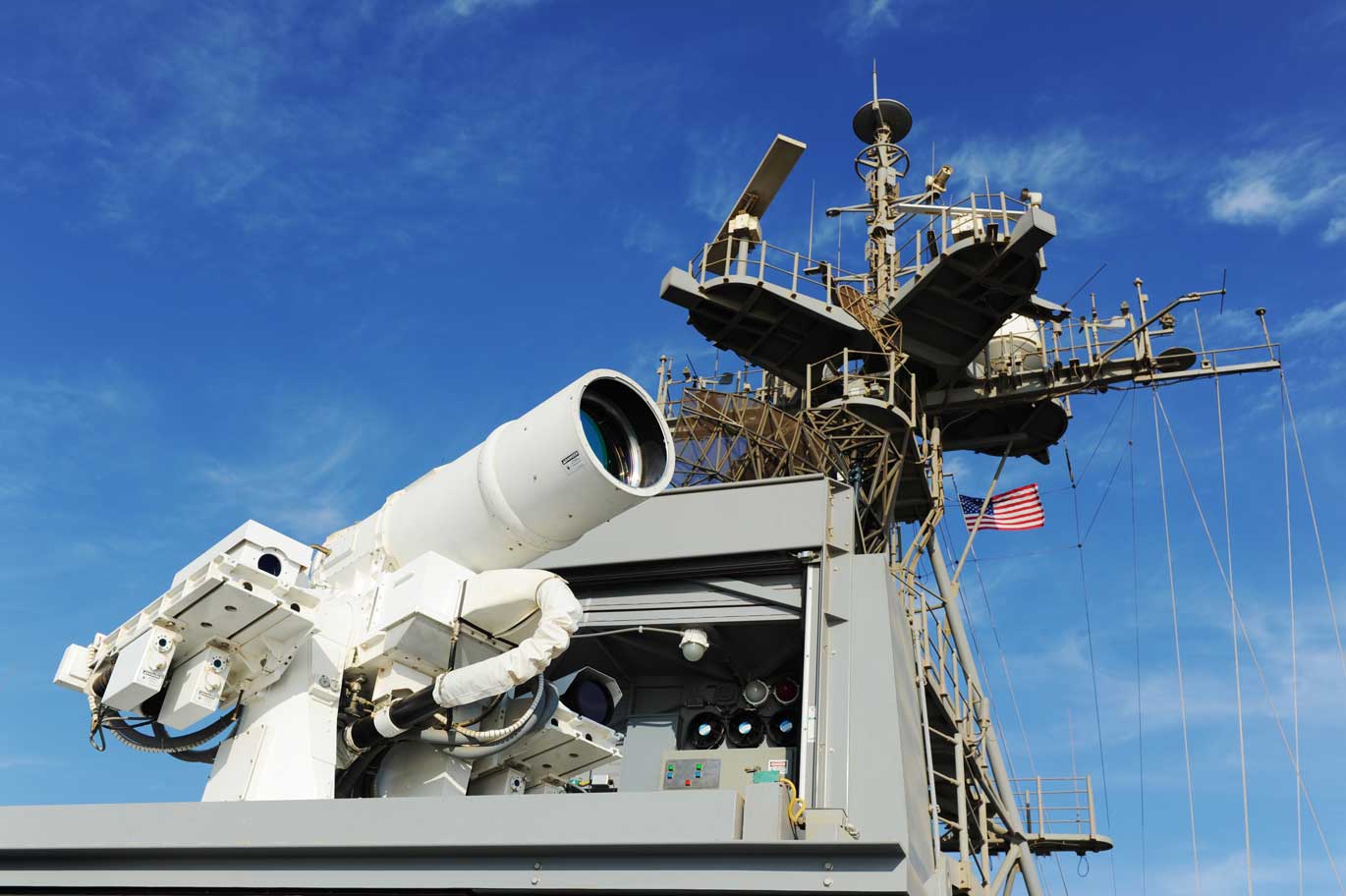 USS Ponce conducts an operational demonstration of the Office of Naval Research (ONR)-sponsored Laser Weapon System (LaWS) while deployed to the Arabian Gulf (US Navy photo by John F. Williams)

Most recent test by US Navy sees laser weapon down drone

The US Navy's amphibious ship USS Portland (LPD-27) recently shot down a drone with a laser weapon during a test at sea of the US Navy’s high-energy laser weapon system, marking a significant milestone in an almost decades long effort to use lasers to counter threats posed by small drones and armed small boats.

In the most recent test, the USS Portland fired its high-power laser weapon, the Solid State Laser - Technology Maturation (SSL-TM)  Laser Weapon System Demonstrator (LWSD), at an unmanned aerial vehicle (UAV) while operating off Pearl Harbor, Hawaii, on May 16.

“By conducting advanced at sea tests against UAVs and small crafts, we will gain valuable information on the capabilities of the [LWSD] against potential threats,” Capt. Karrey Sanders, commanding officer of Portland, stated in an offcial news release.

“The SSL-TM LWSD is a unique capability the Portland gets to test and operate for the Navy, while paving the way for future weapons systems,” he added. “With this new advanced capability, we are redefining war at sea for the Navy.”

LWSD is a high-energy laser weapon system demonstrator developed by the Office of Naval Research and installed on Portland for at-sea demonstrations. Its deployment on a Pacific Fleet ship is the first system-level implementation of a high-energy class solid-state laser. The laser system was developed by Northrup Grumman, with full system and ship integration and testing led by NSWC Dahlgren and Port Hueneme.

The US Navy has been developing directed-energy weapons (DEWs), which includes lasers, since the 1960s. DEWs are defined as electromagnetic systems capable of converting chemical or electrical energy to radiated energy and focusing it on a target, resulting in physical damage that degrades, neutralises, defeats, or destroys an adversarial capability.

According to a report in USNI News, the Navy is currently developing and testing a range of laser weapons, some which require greater power-generation capabilities, like the San Antonio-class amphibious transport docks (LPD-17), and others that could be deployed on a wider variety of ships, including the Arleigh Burke-class destroyer. Navy ships face an increasing array of threats, including UAVs, armed small boats such as those used by the Iranian Navy in the Strait of Hormuz, and adversary intelligence, surveillance and reconnaissance systems.

Given that laser weapons can more easily engage multiple targets and give militaries an unlimited number of shots, they could ultimately save Ministeries of Defence millions in terms of a reduced logistics footprint and ammunition costs. But their effectiveness may be reduced in rainy or cloudy weather conditions.

DEWs also include weapons that use radio frequencies or waves or electromagnetic pulses to cause electrical disruption or damage. Radio Frequency Weapons could disable communications, result in false data transmissions or damage to electronic devices.

The Navy's development of DEWs like the LWSD, provide immediate warfighter benefits and provide the commander increased decision space and response options. The original 30-kilowatt Laser Weapon System (LaWS) used on board USS Ponce in the US 5th Fleet area of operations from 2014 to 2017 to gather data and lessons learned on how the system performed in an operational setting.

The US Navy is also working on a less powerful laser weapon, the 60 kw High Energy Laser and Integrated Optical-dazzler and Surveillance (HELIOS), which could be installed onto destroyers that have less power margin to add in new systems. The Navy is also pursuing an Optical Dazzling Interdictor, Navy (ODIN) that would not destory incoming threats, but instead blind or distract enemy craft approaching a US warship.

Lockheed Martin is also pursuing a 150 kw laser weapon. According to USNI News, at some point this year, a 150-kilowatt high energy laser from Lockheed Martin will be put on USS Little Rock, a Littoral Combat Ship, as part of a layered laser defence effort.

“THOR is a directed energy game-changer,” said Dr. Kelly Hammett, AFRL’s Directed Energy director. “Drones are becoming more and more pervasive and can be used as weapons intended to cause harm to our military bases at long stand-off ranges. We built the THOR weapon system as a deterrent against these type threats. THOR with its counter electronic technology can take down swarms of drones in rapid fire. This capability will be an amazing asset to our warfighters and the nation’s defense.”

As part of its Novel Weapons Programme, the UK is investing approximately £130 million in laser and radio-frequency weapon systems, which are expected to be deployed in the next 10 years.The new systems will be trialled in 2023 on Royal Navy ships and Army vehicles but, once developed, both technologies could be operated by all three services. The UK's Dragonfire laser weapon demonstrator is being developed by a consortia, including Leonardo, BAE Systems, QinetiQ and MDBA.

The Norwegian Ministry of Defense also recently announced funding for a new technology programme looking at laser weapon systems, which will be conducted by Nammo’s Norwegian subsidiary, Nammo Raufoss AS, and the Norwegian Defense Research Establishment.

“Advanced prototypes and the first operational laser weapon systems are in the process of being fielded to military units in several countries,” said Morten Brandtzæg, President and CEO of Nammo. “We are also expecting significantly more capable systems to be fielded in the coming years. This means that it is important to study their potential operational impact, as well as how the introduction of laser technology could affect the future of our business,”

The £2.8 million programme is jointly funded by Nammo and the Norwegian Ministry of Defense, and aims to increase the knowledge on the effect of Direct Energy Laser weapons on the modern battlefield. Together with the Norwegian Defence Research Establishment, Nammo will study how these weapons could be used, and how to protect both current and future Norwegian Armed Forces weapon systems and platforms against them.

Nammo will support the project through its lead ammunition researchers, offering decades of experience in advanced ammunition design and analysis. The FFI will provide operational insight, laser technology and weapons expertise.