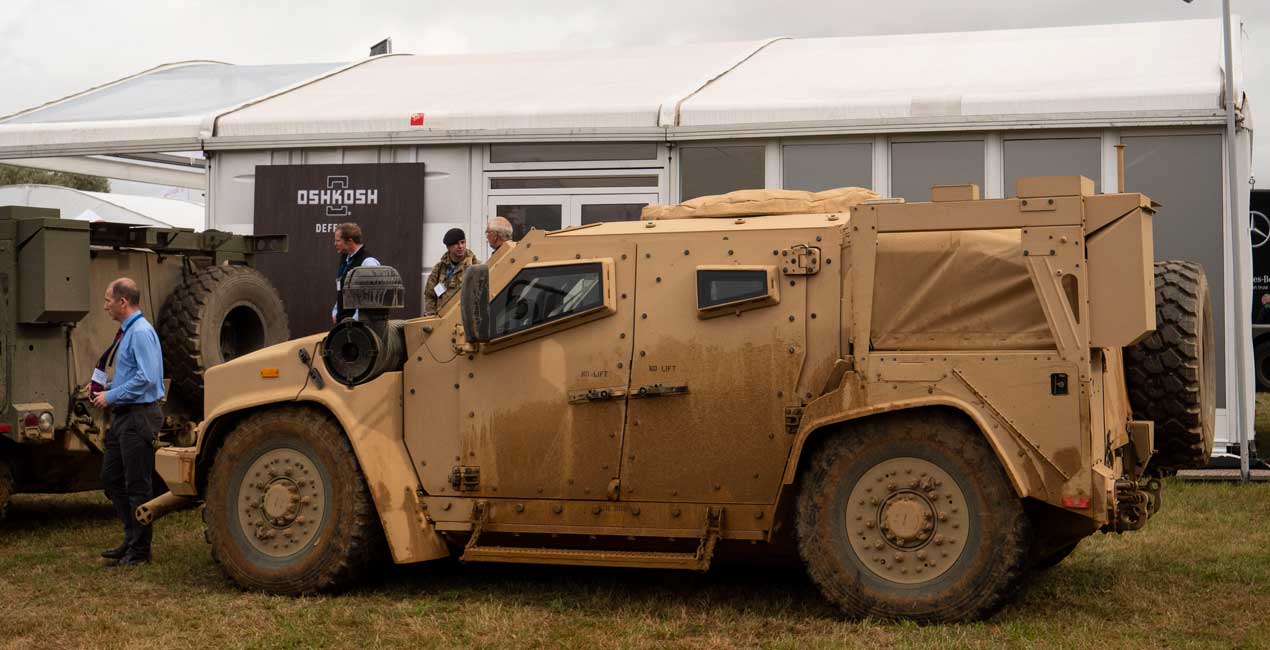 The JLTV at DVD 2018 at Millbrook Proving Ground

The US Army has approved the Joint Light Tactical Vehicle (JLTV) programme's transition into Full-Rate Production. The approval by Dr. Bruce Jette, Assistant Secretary of the Army for Acquisition, Logistics and Technology, follows an Army decision in December 2018 to begin fielding the new platform with the Army's 1st Brigade, 3rd Infantry Division, Fort Stewart, Georgia, in April. The 1-3 ID became the Army's first unit equipped with the JLTVs from Oshkosh Defense in April 2019, after receiving more than 300 vehicles.

George Mansfield, vice president and general manager of Joint Programmes for Oshkosh Defense described the full-rate production decision as a key milestone for the JLTV programme, as it closes out the Low Rate Initial Production (LRIP) phase, which began in 2015. “Important insights from manufacturing and rigorous developmental and operational test during LRIP contributed to shaping the vehicle’s current configuration,” he stated. “The programme remains on schedule and on budget, and ensures our troops have the protection, connection, and extreme off-road mobility they need today for current and future battlefields.” Mansfield says the JLTV is the only light tactical vehicle being fielded today that can manoeuvre within combat formations.

Defence Procurement International got the chance to ride in the JLTV at the British Army's DVD 2018 event at Millbrook Proving Ground in the UK. The vehicle's speed, handling and manoeuvrability on the track and going up against the steepest gradients, was particularly impressive. The UK Ministry of Defence is considering the JLTV for the logistics, command and control, and liaison variant of its Multi-Role Vehicle Protected (MRV-P) programme.

In July 2017, the US State Department gave notice of a potential Foreign Military Sale to the UK for up to 2,747 JLTVs and supporting equipment at an estimated cost of $1.03 billion. But since then the US Army has made changes to its initial JLTV programme, including reducing the number of vehicles it plans on ordering. This reportedly caused the MoD to put its decision about the JLTV on hold. Some reports suggest the price tag for the vehicle may have crept up, which has led some to push for a 'Buy British' approach.

Fieldings of the JLTV to the Ordnance School, Fort Lee, Virginia, the 84th Training Command, Fort McCoy, Wisconsin, the Marine Corps' School of Infantry-West at Camp Pendleton, California, as well as the School of Infantry-East, Camp Lejeune, North Carolina, have also been completed.

"Thanks to tremendous teamwork across two services on requirements, resources, programme management, testing, and other areas, this is a great modernisation success story,” said Jeffrey White, Jette's principal deputy. “JLTV shows how teams focused on stable requirements, mature technologies and the right incentives can deliver meaningful capability advancements in a cost-conscious way."

The JLTV family of vehicles from Oshkosh are designed to give commanders an improved protected mobility solution and the first vehicle purpose-built for modern battlefield networks.

"Getting an improved capability into the hands of soldiers and marines has been our team's driving focus throughout this programme,” said Michael Sprang, Project Manager, Joint Program Office, Joint Light Tactical Vehicles. “They are why we do what we do, and I'm so proud of the hard-working team that brought us to this point.”

The US Army says the JLTV programme remains on schedule and on budget to replace a significant portion of the Army's High Mobility Multipurpose Wheeled Vehicle fleet. The JLTV comes in two variants and four mission package configurations: General Purpose, Close Combat Weapons Carrier, Heavy Guns Carrier, and a Utility vehicle. The US Navy and Air Force also plan to field JLTVs, but in much smaller quantities.