The Batch 2 River class OPVs may be upgraded to carry a 76 mm gun, decoy dispensers, and anti-ship and anti-aircraft missiles. 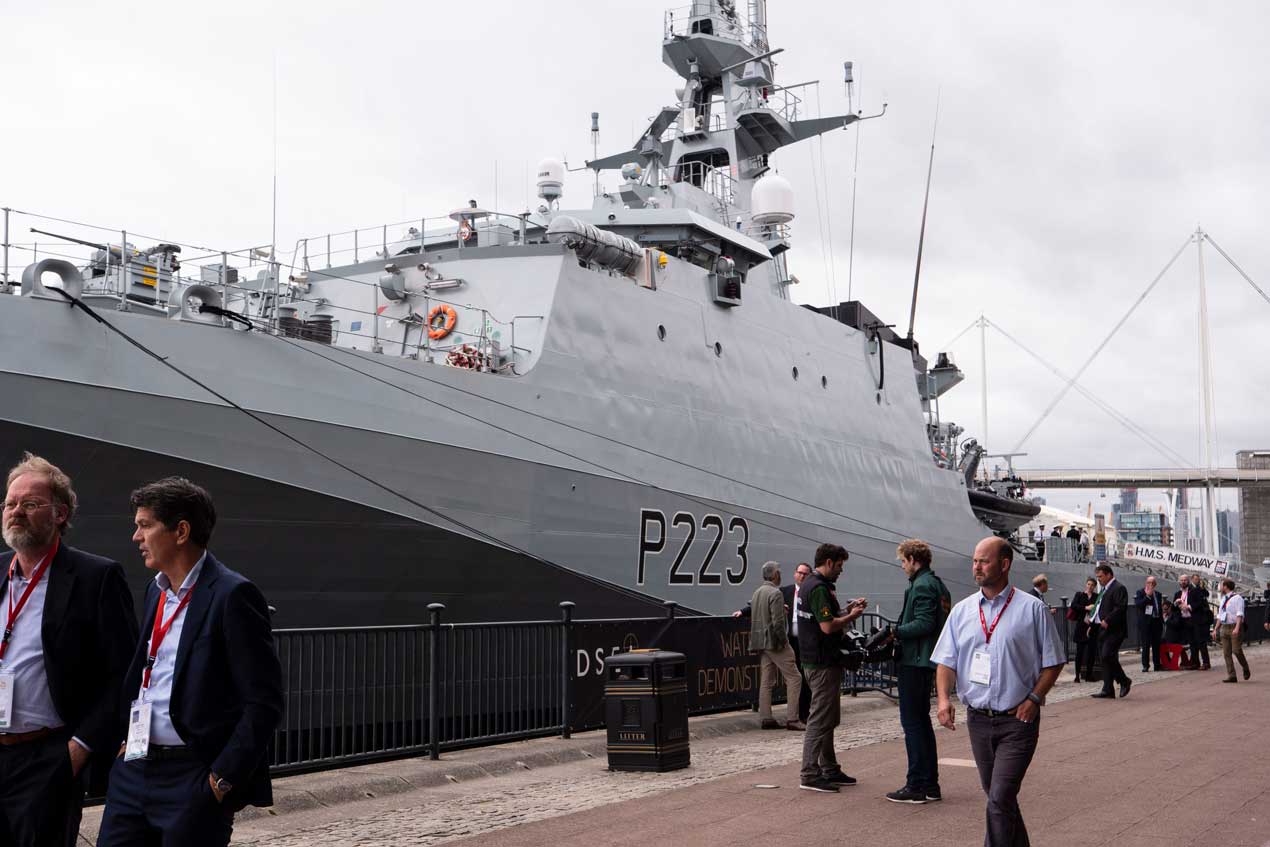 The Royal Navy's new Batch 2 River class Ocean Patrol Vessels (OPVs) were controversial when they were first procured, but one of them, HMS Medway, took centre stage at the static water-borne demonstrations at DSEI this week. With a length of 90.5 metres, Medway was docked harbourside at the Excel centre alongside the Dutch Navy's Holland-class OPV, HMNLS Zeeland.

OPVs are traditionally confined to protecting national waters, enforcing fishing regulations and interdicting smugglers. However, as the number of vessels available to navies across the world declines, the role of OPVs is expanding.

HMS Medway and her sisters, HMS Forth and Trent, were ordered in November 2013 to ensure a continuous supply of orders for BAE Systems' Marine shipyards in Scotland. However, the procurement of the Batch II River class OPV proved controversial at the time because it lacked a hangar for helicopters and a smaller 30 mm main gun. By way of comparison, the Dutch Navy's Holland class OPV features a 76 mm OTO Melara Super Rapid Gun, a hangar capable of operating an NH-90 multi-role helicopter and a ramp beneath the flight deck to deploy an interceptor boat (in addition to two boats carried on port and starboard davits).

Two more Batch 2 River class OPVs, HMS Tamar and Spey, were ordered under the 2015 Strategic Defence and Security Review. A possible vision of the River class’s future, with enhanced lethality and ISR capabilities, was also on display at DSEI 2019. It included a 76 mm gun, decoy dispensers, anti-ship and anti-aircraft missiles and the possibility of a towed array sonar, which is a proposal being studied jointly by the Royal Navy and manufacturer BAE systems.

The Batch 2 ships were initially intended to replace the Batch 1 vessels, HMS Tyne, Severn and Mersey, which entered service in 2003 and are used to patrol UK waters (a modified batch one vessel, HMS Clyde is leased to the Royal Navy and patrols the Falkland Islands). However, in November 2018, former UK Defence Secretary Gavin Williamson announced the first three would be retained to continue in this role and forward based at their affiliated ports. When HMS Clyde’s lease expires, it will be taken on by the Brazilian Navy and the Falklands protection role will be handed to HMS Forth.

Although they share the same class name, on board HMS Medway, the differences between the Batch 1 and Batch 2 vessels is readily apparent. HMS Medway's longer flight deck (which is able to embark helicopters up to Merlin size for short periods) is overseen by a crane to load payloads ranging from humanitarian supplies to unmanned systems. This potential was shown by a mock-up UAV on the deck, which could potentially make up for the lack of an organic helicopter capability.

Going underneath the flight deck, past a flying control station, another new addition for the Batch 2 is the Embarked Force Accommodation. This holds berths for up to 52 people (with a canteen aft, currently fitted as a gym), which could be used for maritime security and humanitarian work, including people rescued from vessels in distress.

The ships feature two RHIBs, launched from davits on each side. Modernity also extends to the ship’s bridge, which features higher levels of automation than the Batch 1 ships. The operations room is where the radar (optimised for tracking asymmetric threats such as UAVs and low flying aircraft) and 30 mm gun are operated.

HMS Medway will be commissioned in her affiliated port of Chatham later in September and in the New Year depart on her maiden voyage to the Caribbean, using a system of “three watch manning.” Here, two watches man the ship and rotate with the third, enabling Medway to spend three years in the region.