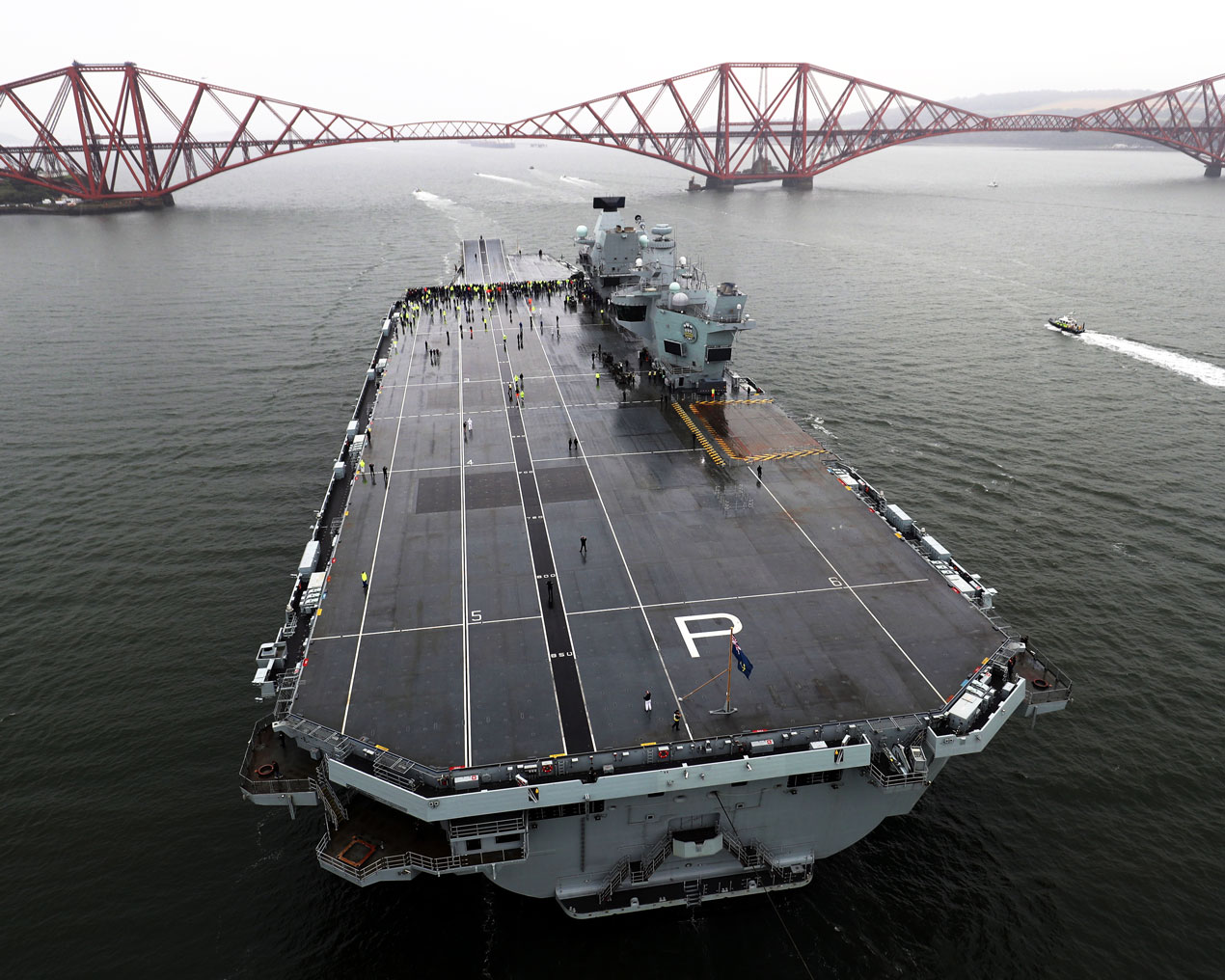 The Royal Navy's two new aircraft carriers, HMS Queen Elizabeth and Prince of Wales,  are the biggest and most expensive warships ever built for the navy with a price tag of more than £6 billion. For some, they represent decades of ambition to see Britain become the leading European carrier strike nation within NATO.

But big-ticket items like these always attract their fair share of criticism from pundits who argue that the carriers have swallowed up a sizeable portion of the defence budget, yet offer little in the way of strategic benefits when it comes to modern warfare.

The first of the carriers to be completed, HMS Queen Elizabeth, recently returned to her Portsmouth base from the US where she underwent flight trails to integrate the fifth-generation F-35B fighter jet, which forms the cornerstone of the Royal Navy's new Carrier Strike capability, which is scheduled to be operational by 2021.

Her cross-Atlantic trip and return to Portsmouth harbour, and the recent docking alongside of her sister vessel, HMS Prince of Wales, was greeted with much fanfare by members of the public and media.  But not everyone is won over by these giant hulking 65,000 tonne pieces of steel with a flight deck the size of three football pitches.

The carriers were in the spotlight again recently with Prime Minister Boris Johnson's controversial aide, Dominic Cummings, lashing out at the Ministry of Defence for  “squandering billions of pounds” on the carriers and misjudged procurements.

Writing for The Times, journalist Max Hastings added more salt to the wound by publishing an article (paywall) describing the carriers “as symbols of Britain's national delusions” and its inflated sense of self-importance.

Save The Royal Navy, a blog written by civilians, academics and former serving military personnel, argues the “considerable investment being made in the ships and their aircraft is the sensible choice for a nation that has been a major maritime power for centuries.”

The carriers have been controversial from the outset. An initial requirement for a carrier displacing 53,000 tonnes and operating up to 50 aircraft, referred to as CVA-01, was first outlined in the 1960s, but it never materialised due to budgetary constraints and disagreements between the Navy and Air Force. The Air Force wanted a smaller, dual-use, aircraft/commando-carrying ship, and the Navy demanded a fully equipped carrier that boasted a flight deck big enough to generate a surge capacity of more than 100 sorties per day.

"The Royal Navy has re-shaped itself around the new carriers, but there has always been an argument for having a larger number of smaller units for tasks that the navy still needs to do, but may now find more difficult," says Clive Murgatroyd MBE, a Lecturer in Defence Procurement at Cranfield Defence and Security Shrivenham and a former naval officer.

AIRCRAFT CARRIERS: A NICE TO HAVE OR A MUST HAVE

But are aircraft carriers merely relics of a time when anti-ship threats were less sophisticated and war was fought along more conventional lines?

Even today, most military strategists would argue the benefits of a carrier platform that gives a country the ability to project power anywhere in the world. “Observers should look at them [the Queen Elizabeth class carriers] as sea bases—large areas of British sovereign territory to be positioned off any coastline to exert different types of power when required,” stated RN Vice-Admiral and Fleet Commander Jerry Kyd.

Having one of them, let alone two, certainly puts Britain in a small, but elite group of countries (the US, France, Russia, China, and India). But the fact that few navies operate these giant warships indicates that building them requires not only deep pockets, but also the global defence and security ambitions, or some may argue delusions, to match it.

As one naval commentator put it: “The main point of aircraft carriers is a show of strength. It allows you to conduct operations around the world, even if they may be limited. Everyone knows they are expensive to maintain, but it is a great tool in foreign politics and policy, especially against smaller countries. In the defence industry, the main point is deterrence.”

Many, however, continue to argue that the UK's defence and security ambitions need to match its purse and with a funding gap of between £7 billion and £15 billion identified in the MoD's Equipment Plan over the next 10 years, arguably ambition appears to be winning out over the bottom line.

The cost of building the carriers almost doubled from an initial estimate of £3.9 billion in 2007 to a final sum of £6.2 billion,  Murgatroyd says the cost of the carriers ballooned due to a number of factors—a delay to the programme in response to the 2008 global financial crisis; the government chopping and changing between different versions of the F-35; whether to build the second carrier or mothball it—not all of which were in the control of the MoD. Costs of the overall capability have further increased, he says, particularly in relation to the F-35B aircraft, as a result of a weaker pound caused by Brexit uncertainty.

Even if the second carrier,  HMS Prince of Wales, hadn't been built, Murgatroyd says the MoD would have still had to pay BAE Systems, the project lead for the two new carriers, somewhere in the region of £630 million because of the Terms of Business Agreement between the Department and the contractor.

With respect to the ongoing maintenance and support costs for the two carriers, the National Audit Office (NAO) says the MoD has forecast costs of £1.3 billion to 2021, when the first carrier-based deployment is scheduled. But as the NAO points out, the Department has a history of underestimating the costs of supporting its equipment. "There is still uncertainty about the costs of operating the F-35B," says Murgatroyd.

He also says that the second carrier, HMS Prince of Wales, could again be at risk of being mothballed by the UK government in its forthcoming review, but that would introduce other risks and significantly weaken the Carrier Enabled Power Projection capability, which sees the carriers performing a range of roles, including acting as helicopter carriers or transporting military forces. The idea behind having two carriers is that one would always be available while the other was being upgraded or maintained.

The carriers have not only come under criticism for their hefty price tag. On the modern battlefield they are  perceived to be particularly susceptibile to attack from more advanced anti-ship hypersonic missiles being developed by countries like China and Russia.

The NAO says the navy will need to move away from deploying single ships to using a significant proportion of its fleet to support and protect the carriers.In terms of weapon systems on board, the carriers feature a Phalanx Close-In Weapons system, which uses radar to warn against incoming anti-ship and aircraft missiles, as well as smaller calibre guns to defend against fast attack craft. The lack of defensive missiles has led some to argue that the carriers should be fitted with MBDA's CAMM Sea Ceptor air defence missile system, which is designed to defeat the latest generation of supersonic anti-ship missiles, but this is thought to be too costly and complex.

HMS Queen Elizabeth recently completed fast jet trials in the US after making her first trans-Atlantic crossing this summer.  Commanding Officer Captain Steve Moorhouse says the trials were  an extremely successful deployment. “Embarking UK F-35 Lightning jets for the first time and integrating them within the carrier strike group is a significant milestone and we are well set for an equally demanding 2020 and our first operational deployment in 2021.”

On the 17 December with much fanfare, the Navy announced the first alongside fixed wing flight on HMS Queen Elizabeth: the first time a UK F-35B fighter jet was launched in UK waters. However, the significance of the event was later downplayed by some reports stating that the F-35B  in question had been left on board the ship following the US trials because it was grounded by a “technical hitch.” One report suggested that the aircraft's failure was not disclosed to the public, which the Navy denied saying it had issued a statement to media about the aircraft being on board.

More than two years on from the first of the two new aircraft carriers being formally handed over to the Royal Navy, and more than 50 years since the UK government first mooted the idea of having a full carrier capability, the controversy surrounding these vessels is not going away. Mistakes were no doubt made along the way regarding spiralling costs associated with the carrier programme, and other defence procurements (notably, UK Strike Brigades and AJAX vehicles) which Brexit has only exacerbated.

What these vessels perhaps symbolise is mixed messages and ambitions from successive governments as to what role the UK wants to play in an increasingly complex and globalised world.

Does the UK see itself as a power merely protecting its own regional interests, and therefore a country that does not need to spend exorbitant amounts of money on big ticket items like aircraft carriers? Or is it a country that wants to project force on the global stage. If the latter is true, can the government do it in a much smarter and cost-effective way, or should we just accept that big defence ambitions always equals big costs?