The Royal Navy takes delivery of its first fully autonomous mine sweeper, an important first step in the development of an unmanned capability for hunting sea mines. 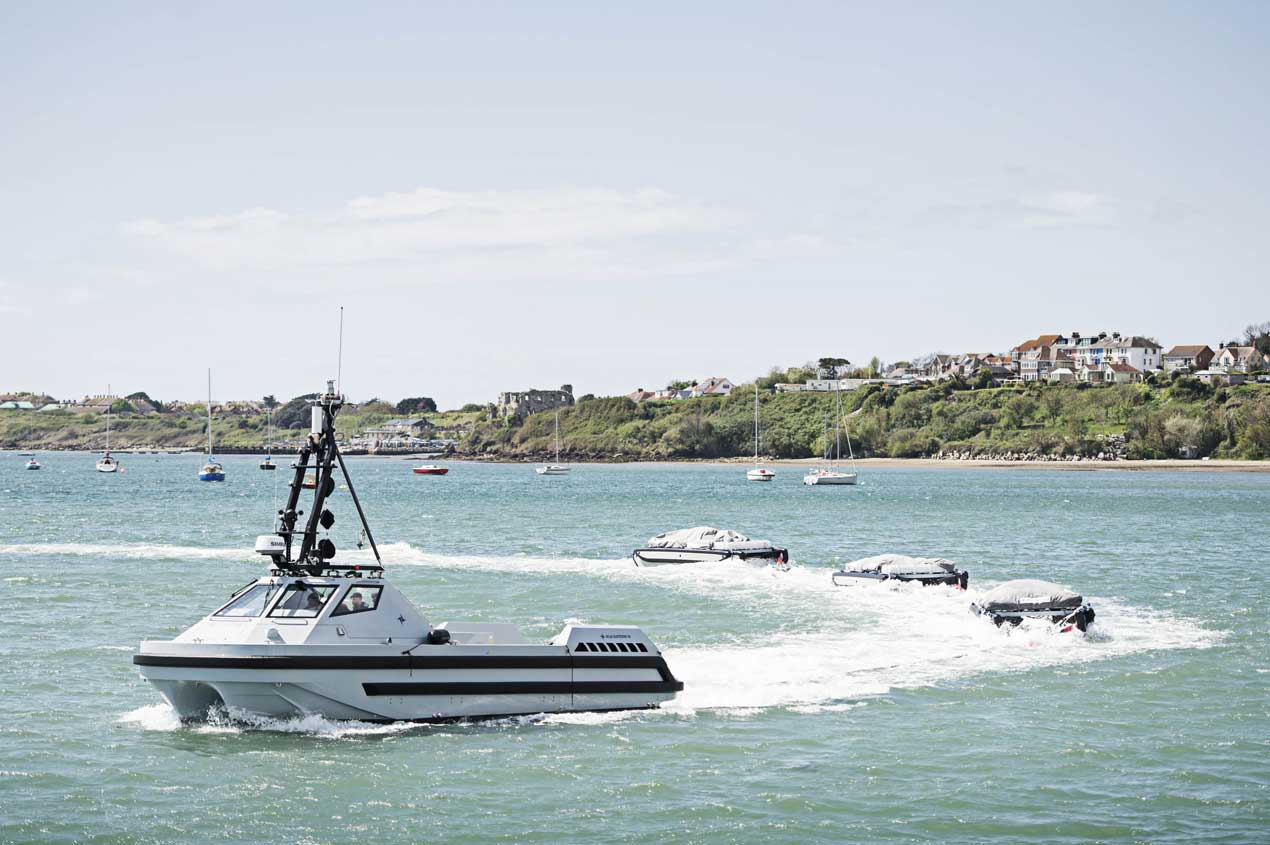 The Royal Navy has taken delivery of its first fully autonomous minesweeper system for clearing sea lanes of mines.

“The Mine Countermeasures and Hydrographic Capability Combined Influence Minesweeping system is the Royal Navy's first fully autonomous capability demonstrator and paves the way for the introduction of this technology across the full range of maritime capabilities,” stated Brigadier Jim Morris Royal Marines, Assistant Chief of the Naval Staff in Maritime Capability, and Senior Responsible Officer for the Mine Counter Measures and Hydrographic Capability (MHC) programme

“Combined Influence Minesweeping is a critical component of the mine countermeasures capability.  This autonomous system will restore the Royal Navy's sweep capability, enabling it to tackle modern digital mines that may not otherwise be discovered in challenging minehunting conditions.

Morris says the autonomous sweep system is a fundamental step in the Navy's transition to autonomous offboard systems to counter the threat posed to international shipping by the sea mine. Demonstration of the associated minehunting system will commence in 2019. At Unmanned Warrior 2016 off the west coast of Scotland, Atlas Elektronik’s ARCIMS unmanned surface vessel (USV), with a towed mine-hunting sensor, is said to have detected and classified mines more quickly than a traditional minehunter vessel, but it also produced a greater volume of data.

“The autonomous minesweeper offers a commander the ability to defeat mines that cannot be countered by current hunting techniques and significantly reduces the risk to crew members in pressured and time-constrained operations,” says Neal Lawson, director of Ships Support at  Defence Equipment and Support.

“The system can offer greater flexibility and upgradability, allowing the Royal Navy to respond better to the sea-mine threat in the long-term and operate more effectively around the world.”

The Mine Countermeasures and Hydrographic Capability (MHC) programme aims to de-risk maritime autonomous systems and introduce these new technologies into the Navy.

Following a period of successful trials the demonstrator system could go on to be used by the Royal Navy in the future to defeat the threat of modern digital mines.

The autonomous minesweeping system is designed and manufactured by Atlas Elektronik UK in Dorset, under a £13 million contract with the Ministry of Defence. It features a “sense-and-avoid” capability and can work alongside other similar autonomous systems.

“This autonomous minesweeper takes us a step closer to taking our crews out of danger and allowing us to safely clear sea lanes of explosives, whether that’s supporting trade in global waters and around the British coastline, or protecting our ships and shores,” said Defence Minister Guto Bebb. “Easily transported by road, sea and air, the high-tech design means a small team could put the system to use within hours of it arriving in theatre.”

The project also aims to demonstrate the viability of an unmanned system that can safely and successfully clear mines and which is designed to be operated from a land or ship-based control station or deployed from a suitable ship or port.

Over the last four months, the system has been put through its paces by Atlas Elektronik, Defence Equipment and Support team members and the Royal Navy’s Maritime Autonomous Systems Trials Team (MASTT).

The system was tested against performance requirements, for example, how well it cleared mines, whether it could avoid obstacles and overall system performance. It will now undergo a series of more detailed trials with the Royal Navy.

The only other ‘unmanned’ system used in mine disposal currently on the Royal Navy’s vessels is the SeaFox mine disposal system, which is remotely controlled. The Royal Navy’s Mine Disposal System is based on two variants of the SeaFox: an explosive free recoverable Inspection vehicle or I-Round; and a live Warshot Vehicle or Combat Round, for identifying and disposing of underwater ordnance and sea mines.

The SeaFox uses a shaped charge of 1.5 kg of high explosives taken from anti-tank munitions. The Royal Navy can run one mission an hour with the SeaFox.The I-Round is used for training, route survey operations and wreck survey.

The Royal Navy has a proud history of minesweeping, dating from World War One when fishing trawlers were converted for use, dragging a chain from the vessel to clear German mines.

But the desire to keep naval assets and crew safe by enabling them to operate at a safer distance from the minefield, as well as the desire to detect and clear mines more quickly, has seen Navies globally begin to embrace unmanned systems.

The OCCAR-EA Maritime Mine Counter Measures (MMCM) Programme between the French Navy (Marine Nationale) and the UK's Royal Navy will develop a prototype/ demonstrator to determine the feasibility of using unmanned surface and underwater systems, with effective command and control, to detect and dispose of mine threats.

Mnehunting is unlikely to become fully autonomous overnight. Most navies are contemplating a hybrid approach where a “mother ship,” which could be a traditional minehunter vessel or USV, will launch and recover unmanned systems carrying different sensors, which will enter the minefield.